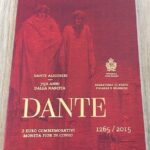 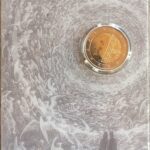 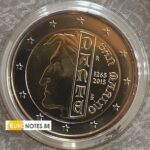 The design by Annalisa Masini shows a portrait of Dante, taken from a fresco by Botticelli. At the right of the portrait, the inscription ‘DANTE’ on a vertical axis. At the right of the inner centre, the name of the issuing country ‘SAN MARINO’ in semi-circle. Between these two inscriptions, the mint mark ‘R’, the years ‘1265’ and ‘2015’ and the initials of the artist ‘AM’. The lettering style used in identifying the nation and the coin's subject was inspired by lettering in the first copies of the Divina Commedia (Dante’s Divine Comedy).