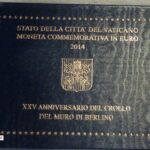 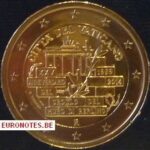 The design depicts some bricks of the partially collapsed Berlin Wall in the foreground, with the wording ‘XXV ANNIVERSARIO DEL CROLLO DEL MURO DI BERLINO 1989 2014’ (25th anniversary of the fall of the Berlin Wall 1989 2014) written within the bricks. An olive branch can be seen in the centre, in a gap between the bricks and a piece of barbed wire, and the Brandenburg Gate appears in the background. At the top, the words ‘CITTA’ DEL VATICANO’ are inscribed.